Are Varicose Veins related to DVT? Yes. Varicose veins raise your risk of Deep Vein Thrombosis (DVT) by up to 900%.

The link between DVT and varicose veins was first reported over 20 years ago.  It was a population-based study from Minnesota and it showed that varicose veins were a significant factor in the development of deep vein thrombosis — in that people with varicose veins had a higher incidence.

In 2012, research from Germany found that people with varicose veins were approximately 9 times more likely to develop a deep vein thrombosis.

The most recent study from Taiwan in 2018 looked at a group of just over 425,000 patients equally divided between those with varicose veins and those without. Over a period of nearly 8 years, DVT was 5 times more common in the group who had varicose veins. Furthermore, a paper this year (June 2020) in the British Medical Journal suggests that having varicose veins increases overall mortality (the risk of dying).

Other Risk Factors for DVT

Most experts consider the risk factors above to be more important than varicose veins.

Can the risks of DVT be reduced?

YES!  There are things you can do to reduce the risks of getting a DVT:

Do Varicose Veins Cause DVT?

Although Varicose Veins are a risk factor for DVT, we cannot say that Varicose Veins actually cause DVT. Therefore, we do not advise our patients to have their veins treated only to reduce the risk of DVT.

In the absence of other risk factors, DVT in people who have Varicose Veins remains relatively rare.

So, please do not worry about DVT if you have varicose veins unless you develop symptoms.

If you would like more information about varicose veins, please get in contact and one of our advisors will be happy to help you.

Why not subscribe to my newsletter? You will receive important information about veins straight to your email in-box. I promise never to share your email address and you will not be bombarded with “spam”. If you later decide my emails are not relevant to you, you can unsubscribe with just one click and you will not be contacted again – and that’s a promise. 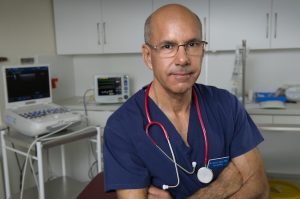 PrevPreviousWhy do varicose veins itch?
NextWhen Should I See A Doctor About My Varicose Veins?Next